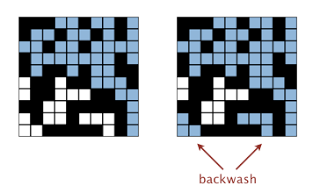 Instead of using a BOTTOM point connecting to all the last points in last row. just deciding whether percolate by testing any point in last row connected to TOP point.

The easiest way to tackle this problem is to use two different Weighted Quick Union Union Find objects. The only difference between them is that one has only top virtual site (let’s call it uf_A), the other is the normal object with two virtual sites top one and the bottom one (let’s call it uf_B) suggested in the course, uf_A has no backwash problem because we “block” the bottom virtual site by removing it. uf_B is for the purpose to efficiently determine if the system percolates or not as described in the course. So every time we open a site (i, j) by calling Open(i, j), within this method, we need to do union() twice: uf_A.union() and uf_B.union(). Obviously the bad point of the method is that: semantically we are saving twice the same information which doesn’t seem like a good pattern indeed. The good aspect might be it is the most straightforward and natural approach for people to think of.

And there turned out to be more elegant solutions without using 2 WQUUF if we can modify the API or we just wrote our own UF algorithm from scratch. The solution is from “Bobs Notes 1: Union-Find and Percolation (Version 2)“: Store two bits with each component root. One of these bits is true if the component contains a cell in the top row. The other bit is true if the component contains a cell in the bottom row. Updating the bits after a union takes constant time. Percolation occurs when the component containing a newly opened cell has both bits true, after the unions that result from the cell becoming open. Excellent! However, this one involves the modification of the original API. Based on this and some other discussion from other threads in the discussion forum, I have come up with the following approach which need not to modify the given API but adopt similar idea by associating each connected component root with the information of connection to top and/or bottom sites.